Each week it seems more and more are "relocated" by the genocidal govt in even my small town... we now have a Chinese, Tai, Japanese, and Mexican restaurant (and store somewhere else in town, I am told)... oddly, no German, French, Swiss, Swedish restaurants (or Scots/Irish that founded the area)... hmmmm... oh I guess that is just a coincidence... maybe those peoples don't have any real cuisine... probably all the restaurants in France are Japanese and Mexican, what do French know about food...? all the wine is probably imported from Israel or Australia.  After Katrina (when the Feds relocated a plethora of voodoo practicing blacks all around the nations in "small town America" they then had a brilliant idea: We can do this all year round and destroy this nation so no one cares or resists our plan for world domination; everyone will just shut up and do what we are told or the welfare checks will stop.

This is genocide... and no one even bats their eyes... our nation is being taken from us and give to others... our forefathers did not sacrifice their all and their very lives so that savages would inherit it and their heirs would commit suicide (due to the brainwashing of our school, media, churches, and governments that have been subverted).

Why is it that all other races and religions have rights in OUR nations, but us...? the heirs of the founders.... have Mexico [see also below hypocrisy revealing story] and China and the State of Israeli and Arabia and Africa and India flung open the doors of their nation and invited white Christians to their nations, and rolled out the red carpet and offered to give us voting rights to change their nations and way of life...? it is SUICIDE what we are doing... and everyone just quietly drinks the Kool-aid, not wanting to be accused of "racism" (a black magic incantation that causes everyone to turn into jelly fish, out of fear of politically correct fantasy over reality).

Here is a billboard in Harrison Arkansas; it actually was put up in response to an Anti-white billboard that was not only insulting, but apparently not considered subversive or a hate crime... 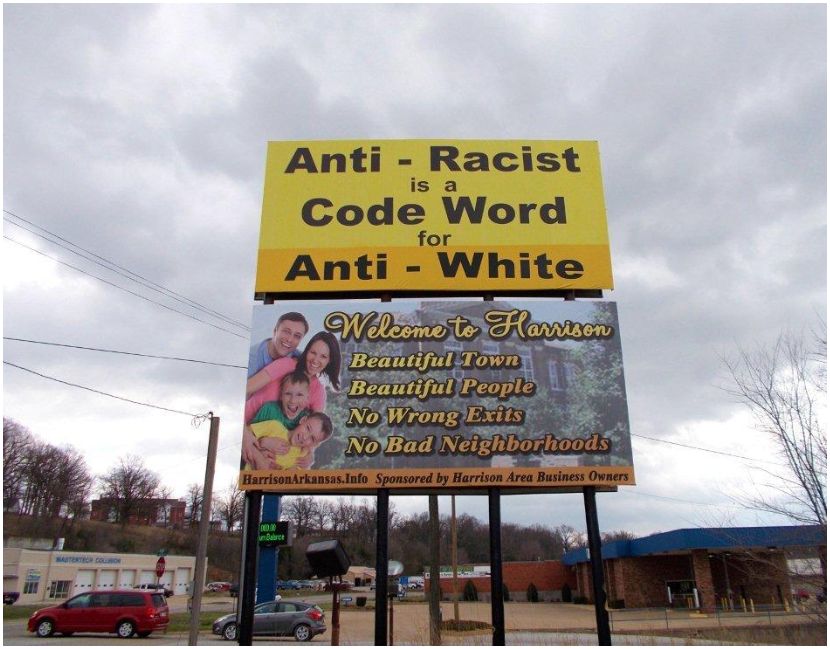 Here is the establishment's response to it (I guess they want to change everything, including add bad neighborhoods). 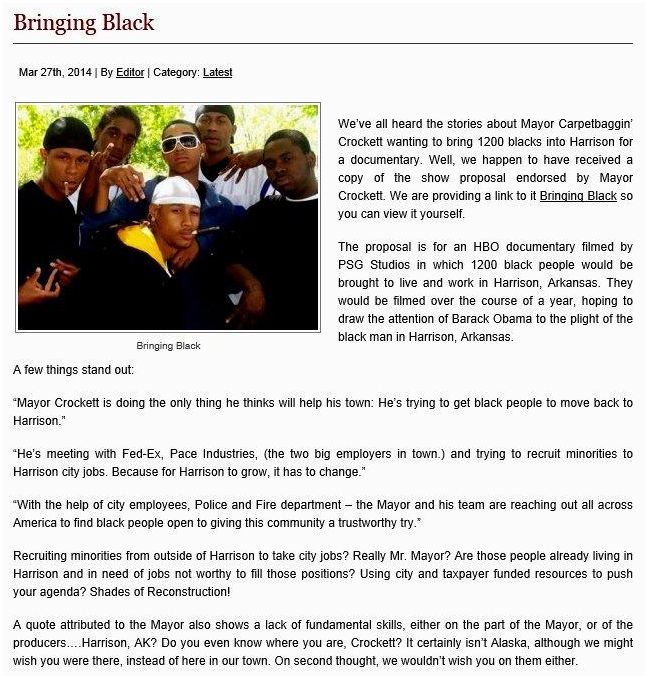 in Harrison Ark. There was a tour bus parked outside filled with blacks. I met one of them in the

aisle and he glared at me trying to stare me down. Then this morning I got this email from my

brother (below) and looked up this link and am attaching it. See attached photo too.

This is from a friend of mine that lives in Harrison.

Wow! And make certain you read, at the bottom of this page, the part that says it will take 30 more seconds to read.!   Please forward to all you know and ask them to forward to all they know.

The shoe is on the other foot and the Mexicans from the State of Sonora , Mexico do not like it.  Can you believe the nerve of these people? It's almost funny.  The State of Sonora is angry at the influx of Mexicans into Mexico ! !

The state legislators from the Mexican State of Sonora traveled to Tucson to complain about Arizona 's new employer crackdown on illegal's from Mexico .  It seems that many Mexican illegal's are returning to their hometowns and the officials in the Sonora state government are ticked off.

A delegation of nine state legislators from Sonora was in Tucson on Tuesday to state that Arizona 's new 'Employer Sanctions Law' will have a devastating effect on the Mexican state. At a news conference, the legislators said that Sonora, - Arizona's southern neighbor - made up of mostly small towns - cannot handle the demand for housing, jobs and schools that it will face as Mexican workers return to their hometowns from the USA without jobs or money.

The Arizona law, which took effect Jan. 1, punishes Arizona employers who knowingly hire individuals without valid legal documents to work in the United States .  Penalties include suspension of, or loss of, their business license.  The Mexican legislators are angry because their own citizens are returning to their hometowns, placing a burden on THEIR state government instead of ours.

'How can Arizona pass a law like this?' asked Mexican Rep Leticia Amparano-Gamez, who represents Nogales .  'There is not one person living in Sonora who does not have a friend or relative working in Arizona ,' she said, speaking in Spanish.  'Mexico is not prepared for this, for the tremendous problems it will face as more and more Mexicans working in Arizona and who were sending money to their families return to their hometowns in Sonora without jobs,' she said 'We are one family, socially and economically,' she said of the people of Sonora and Arizona .

Wrong! The United States is a sovereign nation, not a subsidiary of Mexico , and its taxpayers are not responsible for the welfare of Mexico's citizens. It's time for the Mexican government, and its citizens, to stop feeding parasitically off the United States and to start taking care of its/their own needs.

Too bad that other states within the USA don't pass a law just like that passed by Arizona ..  Maybe that's the answer, since our own Congress will do nothing.!

Be sure to read to the bottom or you will miss the message...

1.. There will be no special bilingual programs in the schools.

2.. All ballots will be in this nation's language.

3.. All government business will be conducted in our language.

4.. Non-residents will NOT have the right to vote no matter how long they are here.

5.. Non-citizens will NEVER be able to hold political office.

6.. Foreigners will not be a burden to the taxpayers. No welfare, no food stamps, no health care, or any other government assistance programs. Any who are a burden will be deported.

7.. Foreigners can invest in this country, but it must be an amount at least equal to 40,000 times the daily minimum wage.

8.. If foreigners come here and buy land, their options will be restricted. Certain parcels including waterfront property are reserved for citizens naturally born into this country.

9.. Foreigners may have NO protests; NO demonstrations, NO waving of a foreign flag, no political organizing, NO bad-mouthing our president or his policies. These will lead to deportation.

10. If you do come to this country illegally, you will be actively hunted and, when caught, sent to jail until your deportation can be arranged. All assets will be taken from you.

Too strict.?  The above laws are the current immigration laws of MEXICO!

If it's good for American's to obey Mexican laws, then it's good vice versa.!!!

This will take less than thirty seconds to read. If you agree, please pass it on. An idea whose time has come: Somehow, that doesn't seem logical. We do not have an elite that is above the law. The self-serving must stop.

This is a good way to do that. It is an idea whose time has come. Have each person contact a minimum of twenty people on their address list, in turn ask each of those to do likewise.

In three days, most people in The United States of America will have read the message. This is one proposal that really should be passed around.

You are one of my 20.  If you don't have twenty, pass it on to whatever number you can!

also not reported is the fact that southern Mexico has built an enormous WALL to keep Guatelmalans out of Mexico... "racism" is apparently only a "one way white street."