Someone emailed me this information

In Cincinnati an 11 year old black girl was stealing from a food store and on her way out she was told to stop by an off duty black officer.

She refused and took off and he tazed her.

This happened in August of this year and just the other day the city of Cincinnati awarded her $205,000 dollars and the supermarket kicked in another $20,000.

Who says crime does not pay?

The city then issued a law that anyone under 15 years old should not be tazed.

The end has got to be near for these idiots are so brazen with their corruption.

Here is a link:

"in the girl's drawstring backpack, Brown found clothing, food and drinks worth $53.81. The backpack was stolen, along with candy, beef jerky and baby clothes."

and NO CHARGES against the criminal

Cincinnati mayor: No charge against 11-year-old hit by police Taser

My comments.  Put your seatbelt on to keep from falling out of your chair laughing.

If 11 year olds don't want to be tazed then they should not steal.

Even better, after the juvenile criminal is tazed, have the officers escort the offending hoodlum home to mommy and daddy.  When the parents come to the door, the officers need to ask, "Is this your child?"  When they answer "yes" the officers should TAZE the parents.  Then, when mommy and daddy pick themselves up off the floor and wipe the drool off their faces and try to pack their hair back into postion from standing up straight, the officers should then simply say, "Your child was caught committing a crime.  Make sure it doesn't happen again.  Each new offense we will come back with higher voltage until it eventually is the electric chair.  Have a nice day."

THAT's how you stop crime.

And if the liberals think it is "cruel" and whine... here's a good idea... let's carve out a state where we will herd all the liberal and criminals to live and they can all live happily together...!

A black officer tazes a black shoplifter, shoplifter gets $225,000.  I wonder if it was a setup and she agreed in advance to pay him a percentage of the lawsuit to taze her...?

It is truly amazing how the city or state or whomever can give the PEOPLE's tax money for STUPID things that are not the people's fault or responsibility.

I remember in college on the soccer team, if anyone did something that was a minor infraction, the team captains had something called "kick and hang" and the offender would jump up with both hands and hang on the top bar of the goal post with his back to the field, and each player would take a shot with the soccer ball from like 30 feet out.

I VOLUNTEERED TO HANG (surprising everyone—that is part of my personality and modus operandi) with the stipulation that everyone lined up in a long lateral row and all kicked at the same time.  It was like being in a lottery machine with all those balls whizzing by.  Sometimes I would even humoursly purposely mis-recite something, insulting the team captains, and they would declare, "Blasphemy, kick and hang", and everyone knew I did it on purpose.

Like the fable of the rabbit and the farmer (or whatever it is) "Please don't throw me in the brier patch... ohhh pleaase....! whatever you do, not thaaaaat....!"

Yes, who says crime does not pay...? and those too immoral to obey the law and too lazy to work soon learn that lesson quite well, though they pretend that they can't learn or do anything right, it is amazing how they can apply their intelligence and talents to do evil.  That alone is proof of their guilt of milking the welfare system while committing crimes on the side for extra cash.

It will be like South Africa where the black adults pay black juveniles to commit crimes for them because the juveniles cannot be arrested or charged with a crime.

—and the store itself that was being robbed kicked in $20,000....!!!!! a tax write off? did the taxpayers pay for that too?  Everyone should stop going to the store and let it go out of business.

Do they suffer from Stockholm Syndrome...?

It is truly amazing the immoral anti-intellectualism of our age.

Law and morality bow to perverse notions of the gods of political correctness... it is a MENTAL disorder...! 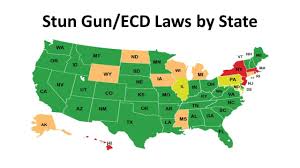 Stun Gun TASER Laws by State - YouTube
youtube.com
(not sure what the colors mean, I guess green is "go" (or yes)
and red is "no" (illegal)