Skip to main content
1. Anti-president / Imposter-in-chief Obama said we are not a Christian nation—and clearly, a "Constitutional expert" and "genius" and "honest" and "upright", "moral" person like himself knows better than our Founders... right...? so if we are not, WHY should we do the (alleged) "Christian thing"...?
2. It is NOT the "Christian" Thing.  Christ said "Give not that which is holy to the dogs, cast not pearls before swine lest they turn and trample and REND you".  (that was not a suggestion).  God does not conform to the polluted notions of perverse modern society.  He is Immutable.  He is not politically correct.  Those who are DO NOT KNOW the only true God, but are humanists and idolators (worshipping the god of their own mind, which they fashioned in their own likeness; they are friends of the world and the enemies of God).  God COMMANDED separation.  Christ Jesus did NOT abolish the Law.  He said that He did NOT and that not one jot or tittle shall pass from God's Law—because MORALITY DOES NOT CHANGE and GOD DOES NOT CHANGE.  Why do you believe that Jesus said the OPPOSITE of what He said? —because you are not of His sheep, because HIS SHEEP KNOW HIS VOICE AND FOLLOW [OBEY] Him and will not follow the voice of STRANGERS.  God commanded separation.  Christ said love thy enemy—which refers ONLY TO OUR OWN KINSMEN (and not perverts or criminals, but kinsmen with whom we don't get along).  There is a WORLD of difference between our personal enemies (kinsmen) and God's perpetual enemies (aliens and corrupt peoples whom He cursed).*  The Bible is NOT anti-intellectual, but HUMANISTS who deludedly think that they are Christians (or who maliciously pretend to be) RENDER IT anti-intellectual, even as they do our laws; and doing so DESTROYS US.  [* See my book, Ten Commandments For Youth —For Everyone! For Youth and Young-minded* Adults,  c.440pp., 6.25 x 9.25, pb., 25.00 + P&H (* Those who are not so old and set in their ways that they cannot learn, and discern truth from error, and care enough to repent).]  Not only does God's Word forbid "helping the world"—NO philosophical system can support it either and it is a violation of the U.S. Constitution and the Common Law to use tax money and force the people to support ANYTHING, let alone the alien, anti-christian world.  What most "Christians" confuse as being Christianity is actually HUMANISM.  Christ said, "If ye were of the world, the world would love his own: but because ye are not of the world, but I have chosen you out of the world, therefore the world hateth you" (John 15:19).  If, therefore, you are helping take care of the world, and the world is helping to take care of you—you are not of God but of the world.  And Scripture says if you are a friend of the world you are the enemy of God.  The "world" that God so loved does not refer to the whole world, but the elect of His people in the world—which a clear reading of Scripture will easily show.  Various nouns (so-called "Gentiles", that is, nations, people, or even the word "Jew" after the captivity-exile-return, and the word world, and the word "all"—which does not mean "every last one" unless context, immediate and overall harmony in the entire Word of God, clearly indicates; often it means "all of the specific, limited group in question)in Greek and Hebrew, are no different than pronouns and in order to understand what the sentence is saying YOU HAVE TO UNDERSTAND THE ENTIRE WORK.  Imagine reading a novel and imagining that "he, she, them, her, their, our, us, we, etc." referred to EVERYONE all the time... the book would be NON-UNDERSTANDALE NONSENSE!  This is why we are to "study to show ourselves approved" and "rightly divide the Word of Truth".
3. What part of NO OTHER GODS don't you understand?  What part of embracing OTHER GODS do you think is the "Christian" thing to do...?
4. PLEASE TELL ME HOW a nation that is $22 TRILLION in debt is a "wealthy" nation that can afford to fund the rest of the world...?
5. Scripture says to even say "God speed" to someone who rejects the DOCTRINE of Christ... is to be a partaker in their evil...!
6. Nowhere did Christ say it was the sheep's job to lay down their lives for the dogs, swine, wolves, and serpents!  THAT is really a perverse understanding of Scripture (and barnyard etiquette). 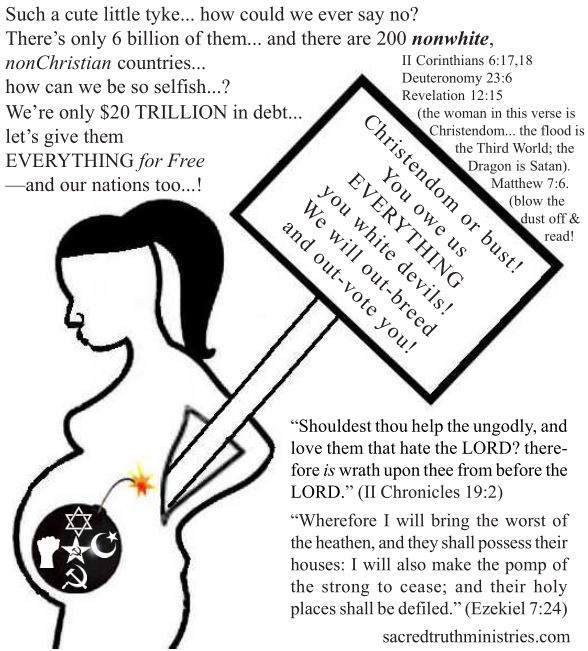 The below reposted upon the request of the author:

The below originally appeared in the online edition of TBR magazine www.barnesreview.org

Congratulations to the author of the recent Baptist News column titled"ERLC, George Soros and the Evangelical Immigration Table.” The Southern Baptist “leadership” -- on whose behalf it was written -- has done a masterful job of hiding the truth in plain sight.

It dismisses recent Breitbart.com reportage exposing the Evangelical Immigration Table (EIT) as nothing more than a leftist organization masquerading as representatives of "conservative” Christianity.

Their agenda is evident in their having deceived the governors of several "red" states into believing the latter will lose the "Christian” vote if they don’t flood their respective states with Muslims and other dubious "refugees," a fact the column appears to confirm.

The column also denies Breitbart.com's claim that the Southern Baptist Convention -- through its Ethics and Religious Liberty Commission (ERLC)  -- has been funded by Marxist billionaire George Soros. The author emphatically states that "These claims have proved to be false."

However, a few paragraphs later he concedes: that "EIT is supported by the National Immigration Forum,” an organization chaired by George Soros who also awarded it grant money.

The author first denies that George Soros has funded the EIT, but then describes the very money-trail, itself! The fact that Soros money was first LAUNDERED through the National Immigration Forum – before reaching the EIT – doesn’t make it any less tainted.

George Soros has contributed hundreds of millions of dollars to more than 200 leftist groups advocating “open borders” and amnesty for Third World illegal aliens. The circuitous route of Soros funding is designed to obscure its origin and confuse gullible individuals like the author of the editorial. Or, as I suggested above, its purpose is to hide the truth in plain sight so Southern Baptist readers won't notice.

Another troubling fact hidden in plain sight appears where Ali Noorani, Executive Director of the National Immigration Forum, is quoted as stating: “Quite simply, there has never been a single penny from George Soros that has gone toward the work of the Evangelical Immigration Table.'”

A search of the National Immigration Forum shows it to be an advocacy group for Muslims, and Mr. Noorani is a Muslim of Pakistani descent. The Quran grants immunity to Muslims who lie to infidels for a “higher purpose,” such as to gain an advantage and defeat them.

The principle is called Taqiyya among the Shiites, and Muda’rat among the Sunni. It might help explain Ali Noorani’s forgetfulness, and give focus to his claim that the EIT has never received “…a single penny from George Soros…”

Noorani and the Baptist Press have joined forces to deny funding from George Soros, even though it is conceded earlier in the editorial. Have we carried ecumenism too far when  Southern Baptists make common cause with a Muslim group to deny an acknowledged fact?

When Southern Baptists, a predominantly patriotic and theologically conservative people, give their Annie Armstrong and Cooperative Fund offerings, they assume the money will be used to plant churches and proclaim the Gospel. Instead, it is going to committees like the ERLC whose leader, Russell Moore, gives it to Muslim activists like Ali Noorani.

Southern Baptist, and other evangelical Christians are literally funding the very Trojan horses that flood our country with aliens hordes.  If this continues, America, like ancient Troy, will see the total destruction of our nation, religion, culture, and just about everything once held dear.