See PDF for a brief satire presentation (see the brief info below first).

“Be holy as I the Lord thy God am Holy”.

God is Immutable.  The Standard of Holiness for Him does not change.

We cannot be holy as He is Holy if the Standard of Holiness changes for us.

Sinful minds, who love darkness (thinking it is the “new light”)

simply get used to immorality and consider it a “non-issue” (as if they were God;

to determine good and evil for themselves).

Antinomian = anti = “against” + nomos = “law”; that is, those anti-intellectual “Christians” (which constitute 95%) who mindless believe that Jesus abolished the Law of God—despite the fact that Christ Himself said, “Think NOT that I am come to destroy the Law... I am NOT...” and that not one jot or tittle (smallest letter or tiniest flourish of the pen stroke) would pass from the Law.  Jesus said “My sheep know My Voice and follow [obey] Me” and that they would not follow the voice of a stranger.  Since 95% of those who claim to be “Christians” believe the very opposite of what Christ said, and follow the voices of strangers, what does that say about them...?  Righteousness / Salvation does not come from the keeping of the Law.  Obedience is an evidence of salvation; the by-product of regeneration; and establishes one as a honorable son who will be blessed and inherit of the Father.  Salvation is 100% of Christ, but we are saved UNTO (not “through”) good works.  Good works, obedience, keeping the Law of God, bearing fruit are all synonyms.  There are no “good works” accepted in God’s Eyes except what He commanded us throughout all our generations forever.  I John 2:4 says those who do not keep God’s Commandments don’t even know God and the Truth [Christ, the Truth; and the Holy Spirit of Truth] is not in them.  Every tree is known by its fruit.  Those truly a branch on the True Vine, Christ, will bear His Fruit.  He declared, “If ye love Me keep My Commandments”.  He had no commandments of His Own, but came to do the Will of the Father and set the example for us.

If one of God’s children is in sin He does not hear his prayers—it does not matter what that sin is.

If a “Christian” is not concerned that he may be in sin against God, or not concerned that his prayers will not be answered, that is evidence that he is spiritually dead and has never been regenerated; if he does not care whether he may never have been regenerated or not, that is simply more evidence that he is spiritually dead.

All of Christendom is not facing all of the evils and total overthrow because God is happy with us; but because our sins have stopped His Ears so that He will not hear or deliver.

Repent before God (which entails knowing what sin is, which John defines as “transgression of the Law [of God]” or perish in the alien / perverse Antichrist Flood. 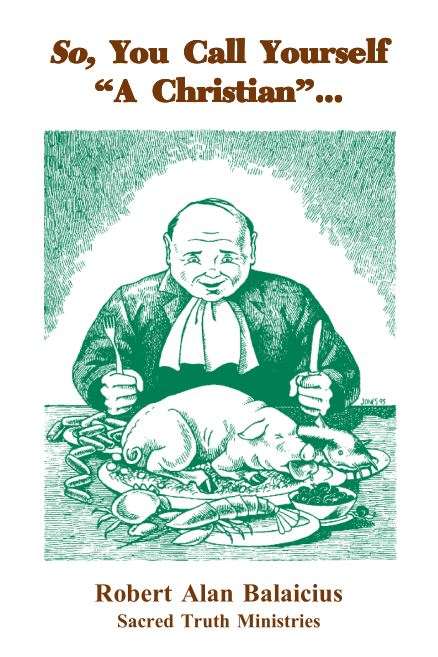 - So, You Call Yourself A Christian..., Robert Alan Balaicius; a powerful primer showing that God’s Law could not have been abolished, not only because of God’s Promises and Decrees, but because of God’s Very Nature.  What makes a Christian a Christian?  What makes God God?  Peter’s Vision did not abolish God’s Dietary Laws (neither did any other N.T. passage). 76pp., 7.00 + P&H.

See also by the same author:

- Are We Keeping God’s Law Yet? in-depth discussion many Laws of Scripture, reveals spiritual meaning behind laws of God, physical reason why given; detailed, practical, insightful study; what it means to “meditate” upon God’s Law, which also explains how God’s Law will be prominent in the lives of those who are the elect. 500pp., 6x9, pb., 25.00 + P&H.

[* Young-minded, refers to opposite of “you can’t teach old dog new trick” and Christ taught if one wanted to see/enter the Kingdom he had to become as a little child, child-like faith / obedience.] shows that 10 Commandments not 10 individual laws, but 10 Categories of Law under which entire Law of God is organized; I show how other laws are so categorized & show how breaking any one is tantamount to breaking all; and that all 10 categories if violated are sins against God and all 10 categories if violated are sins against our kinsmen. Very detailed, enlightening, instructional; profound new thought and clear teaching that will be hard for antinomians to refute, if they will read. Also a detailed exposition of Matthew 5:38-40 concerning loving our “enemies”, “turning the other cheek”, “giving thy coat and cloak”, etc. These were not general, broad-based, universal statements, but only referred to accepting just punishment in court if one had truly sinned and damaged a kinsman and thus to accept the punishment gracefully, showing your true remorse for having damaged a brother; and “going the extra mile” likewise had specific (not universal) application; but modern “Christianity” has perverted this Sermon on the Mount teaching to mean we should just bend over and accept abuse and lie down and die. Christ taught Occupy till I come (not surrender or blend in with the world), and Paul wrote, have no fellowship with the unfruitful works of darkness but REBUKE them... this is not consonant with “turning the other cheek” to GOD’S enemies, the enemies of Christendom: immoral people, aliens, perverts, criminals, antichrists, etc., which is not what Christ was teaching.]