—and the enemy does not play by the same rules... the enemy recognizes no rules; yet demands that you follow those they illegitimately impose upon you.  Wake up!

[Imagine a football, soccer, basketball, or hockey game in which the opposing team was using swords, spears, lances, battleaxes, knives, and even guns, while your team was only playing by the rules.  Imagine a boxing, golf, or tennis match in which the opposing team is not even qualified to be in the game... and has blatantly used performance enhacing drugs all through the match (in addition to using weapons against you, even lobbing over the net in tennis, not balls, but hand grenades).  Imagine such an event in which the opposing team had no delusion about it being a ‘game’—they knew it was a war and their objective was to kill you and like the Huns and Mongols and Muslims, take your wife and children captive to be their slaves and sexual playthings.  Imagine now that you still think it is a ‘game’; that you think the other team is honorable and there have simply been a few pretty bad ‘fouls’ and some pretty bad ‘calls’ that the referee made.  Imagine you for some MINDLESS reason thinking it is ‘all good fun’ and ‘sport’ and that you are just ‘having a good time’ and have your eyes set on the championship trophy.  That’s what is happening to all of Christendom.  That’s why Christendom is being destroyed.  The corrupt, traitorous and even alien politicians continue to tell your team to be honorable and play by the rules; while giving the other team monetary bonuses for each flagrant violation of the rules.  All nations of Christendom are being subjected to aliens, alien ways, alien religions—and God commanded us NO OTHER gods... WHAT PART OF THAT don’t you understand?  This does not merely mean that you yourself are not to worship them, but that you are allowed to watch invading aliens set up their pagan temples (and even ‘worship’ with them), and then allow corrupt politicians to pass laws that benefit the aliens and their false religions and discriminate against you in your own land.  This does not mean you can turn a blind eye to false religion, pagan temples set up in your neighborhood, pagan evangelists prosyletizing in your city, corrupt politicians allowing more and more to invade and using your tax money to fund them and their temples; giving them special treatment in jobs and in society to practice the stringent demands of their religion, even shutting down entire sections of city streets and sidewalks several times a day... while traitorous politicians pass unconstitutional (illegitimate) laws declaring that Christians are not fit to hold public office and all signs of the Christian religion upon which our nation was founded are to be stripped from all public places as well as government places.  This is the most-blatant perversion of our Constitution.  Our nation was established openly and unashamedly as a CHRISTIAN nation.  Our Founders believed there was only one religion and they established this nation for OUR PEOPLE; they had NO DELUSION in their minds about equal rights for all people and all religion.  The very notion is suicide.  It is not a ‘game’.  The aliens are invading and conquering... and the majority of our people are brainwashed—and the majority who are not brainwashed passively watch, accepting death and the death of their families and our nation and glorious heritage; and in doing so they sin against God.] 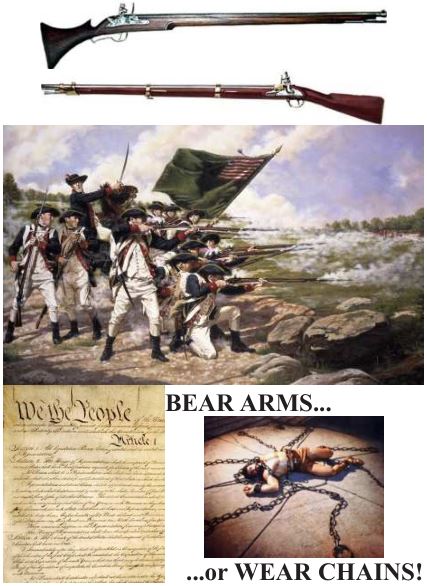 “What we obtain too cheap, we esteem too lightly; it is dearness only that gives everything its value. Heaven knows how to put a price on its goods, and it would be strange indeed if so celestial an article as freedom should not be highly rated.” —Thomas Paine [from The American Crisis, No. 1, in Pennsylvaia Journal (December 19, 1776)]

“If ye love wealth better than liberty, the tranquility of servitude better than the animating contest of freedom, go home from us in peace. We ask not your counsels or arms. Crouch down and lick the hands which feed you. May your chains set lightly upon you, and may posterity forget that ye were our countrymen.” —Samuel Adams (speech at the Philadelphia State House, August 1, 1776)

“Those who would give up essential liberty to purchase a little temporary safety, deserve neither liberty or safety.” —Benjamin Franklin

“If you will not fight for the right when you can easily win without bloodshed, if you will not fight when your victory will be sure and not so costly, you may come to the moment when you will have to fight with all the odds against you and only a precarious chance for survival. There may be a worse case. You may have to fight when there is no chance of victory, because it is better to perish than to live as slaves.” —Winston Churchill

“And how we burned in the labor camps later thinking: What would things have been like if every security operative, when he went out at night to make an arrest, had been uncertain whether he would return alive, and had to say good-bye to his family? Or if people had not simply sat there, palling with terror, but had understood that they had nothing left to lose and had boldly set up an ambush of a half-dozen people with axes, hammers, pokers, or whatever else was at hand? The cursed machine would have ground to a halt. If, if, if! We didn’t love freedom enough. We purely and simply deserved everything that happened afterward.” —Aleksandr Solzhenitzen

“Be not deceived; God is not mocked: for whatsoever a man soweth, that shall he also reap.” (Galatians 6:7)

“Firearms stand next in importance to the Constitution Itself. They [guns] are the American people's liberty teeth and keystone under independence. The church, the plow, the prairie wagon and citizen's firearms are indelibly related. From the hour the Pilgrims landed, to the present day, events, occurrences, and tendencies prove that to insure peace, security, and happiness, the rifle and the pistol are equally indispensible. The very atmosphere of firearms anywhere and everywhere restrains evil interference—they deserve a place of honor with all that's good. When firearms go, all goes—we need them every hour.” —George Washington

“In questions of power, let no more be heard of confidence in man, but bind him down from mischief by the chains of the Constitution.... Experience has shown, that even under the best forms [of government] those entrusted with power have, in time, and by slow operations, perverted it into tyranny.... History in general, only informs us what bad government is. Blest is that nation whose silent course of happiness furnishes nothing for history to say.... Resistance to tyrants is obedience to God.... The tree of liberty must be refreshed from time to time with the blood of patriots and tyrants.... God forbid that we should ever be twenty years without such ‘rebellion’.” —Thomas Jefferson

What heroes do you quote and follow? a leftist movie star...? a Third-World Athlete...?

If you don’t agree with the above sentiments move to a Third-World, communist, nonchristian nation. Christendom is not for you.  You don’t deserve freedom.

If pulse you have if yet you care, with all you know please this do share!