Am I the only one who remembers this “ancient history” from 4 years ago...?

Click on the below links and scroll through the photos of the massive bike / scooter sharing fiasco...

People place no value on what they do not own, and did not have to sacrifice (lawfully, through time and work) to obtain.  Thus—they do not take care of it...!  This applies to FREEDOM too...!  Thomas Paine expressed: “What we obtain too cheaply, we esteem too lightly; it is dearness only that gives everything its value.  Heaven knows how to put a price on its goods, and it would be strange indeed if so celestial an article as freedom should not be highly rated.”

Now... imagine scenes like these photos at the links below with every single product that you or anyone would use... hi-fi, computers, cameras, furniture, appliances, clothes... and do you really want to rent a sofa that contains DNA, disease, and germs from the last person who rented it for an hour along with the hooker that he rented...?

But small-minded individuals do not realize that no one owns anything and you rent anything that you want to use—SOMEONE has to own it.  WHO then would own everything?  The billionaire elite who violate people’s rights left and right without conscience... who experiment on people with dangerous drugs... (and have done so for 100 years)... who destabilize nations and start wars just so that they can profit from it all.  Furthermore, if one person owns everything, that is called a monopoly.  If a person owns a monopoly he can RAISE THE PRICE to whatever he wants and you have to pay the demands if you want to use it.

The Puritan Work Ethic (which exists only within Christianity and Christendom) and that “evil” Capitalism (that engenders healthy, domestic competition) is what keeps products made well and at a reasonable price.  Outsourced products made in the Third World are crap and fill our landfills just like the scooters and bikes do in the photos in the below links.  Billionaires moved U.S. factories outside the U.S. to China / Mexico / India / etc. (often with U.S. taxpayer money, often after having been given billions in “bail out” / “quantitative easing” money, or more properly, government-counterfeited money that the billionaire elite get to use first, before the common man gets stuck with it and realize it is worthless) and they get a pair of sneakers made (inferiorly) for $2 / pair but still sell them to you here in the U.S. for $120... and then they import the Chinese / Mexicans / Indians / etc. themselves here to the US to take the jobs in any factories still open, and take over our neighborhoods and governments in the process.  All businesses and politicians government employees that are involved in this are guilty of Genocide and High Treason.

If you remember the scenes even from places in the U.S., bikes or scooters were just callously dropped, on the sidewalks and streets, and people could not walk on the sidewalks or drive on the streets.  City workers had to be paid to drive around in dump trucks to pick up, remove, and haul off all of the bikes and scooters strewn all over the city, blocking movement and life far worse than the Canadian Truckers—who were doing it to pressure politicians to stop committing treason.  Mindless savages just let go of the bikes or scooters, as if stepping out of a pair of dirty jeans and t-shirts, and let them fall to the ground where they stood, even causing damage by their careless abandonment, like thoughtless rats scurrying over the city squalor, without any thought of responsibility to the company that owned the bike, or the other people who would use the bike, the sidewalks, or the streets.  Aliens were even stealing the bikes or scooters in San Francisco or Dallas, Texas.  WHO pays for the stolen or damaged products left in the rain, dropped and broken and stepped on?  Well, the people who pay to rent them pay the cost of theft and damage.  The price of rent is raised.  Well, some may shallowly assert, “If the rental price is too high people will stop renting the product, and the price will have to be lowered”.  THINK AGAIN DOROTHY.  “This isn’t Kansas any more, Toto!”   Stop thinking in the sterile myth of ideal utopia—stop dreaming and use your street smarts and consider reality.  Guess what...? since government and big business are in bed together, if not enough people are renting any given product, they will just pass a law and AUTOMATICALLY TAX everyone, whether they use the product or not.  That is what they have done with socialized medicine and vaccines and insurance.

How would you like it if you went to a restaurant and ordered a steak dinner for $30, then, when the manager brought the bill, it was $120...?  As your face reddens and steam escapes from around your collar and your glasses fog up, you are told: “Oh, well, that extra $80 is to pay for meals for all the other people who cannot afford to eat here; don’t be so selfish and hateful and stop bullying.  Oh, by the way, in the future, it does not matter if you actually come here and order a meal... since the money system is now digitalized, we will simply debit your account $120 a week whether you eat here nor not.  Have a nice day!”

Ah... communist utopia, it is so wonderful.  I can’t stand all those evil people who are resisting it.  They are the ones who are causing all the chaos, misery, woe, and poverty in the world!  They should be rounded up and sent to “re-education” facilities; and if they can’t be re-educated, then simply “dispensed with”.

Our Founder and Second President John Adams expressed: “Our Constitution was made only for a moral and religious people. It is wholly inadequate for the government of any other.”

Our government and society (when it runs as it is supposed to) is based on the honor system and is ONLY possible in Christendom, peopled by the peoples of Christendom.  Third world / nonchristian nations cannot so function; they operate either under CHAOS or COMMUNISM.

Scroll through the photos at the below links and then ask Sorosstein and Schwabenheimer and Goldengates to explain the obvious about “You will own nothing and be happy”...

Really...? OK.  YOU FIRST!  Give away all your property, bank accounts, and personal possessions and move into one of the government housing projects in your city.

If no one will own anything... WILL EVERYTHING BE FREE?

Well, already I am not happy.  That was not in the color glossy brochure.

Insurance... I imagine there is going to be mandatory INSURANCE on every single product that is “rented” (just like Amazon tries to sell, “extended warranties” on nearly every single product they sell, since most people now realize all third-world products are crap and barely survive to see the expiration of their “warranties” which are rarely honored, so now you have to buy a warranty on top of the warranty.  So, WHO is going to pay the cost for insuring every single product? and will their be any “rent controls” on the rented product as well as on the insurance...?

What about your body...? what if someone else wants to “rent it” for an hour...?

If you own nothing, you don’t own yourself.  WHO then owns you?

Silly you.  Why are you working so hard for nothing?  Just sit back in communist utopia and let nobody else do the work.  The magic elves come out and do all the work while you sleep.  Just be sure to water the money trees twice a day to keep them producing.

Scroll through photos at the links below.

[Public Notice: Trough for rent when not in use by the pigs, who must pay rent on the trough even though there is no food in it.] 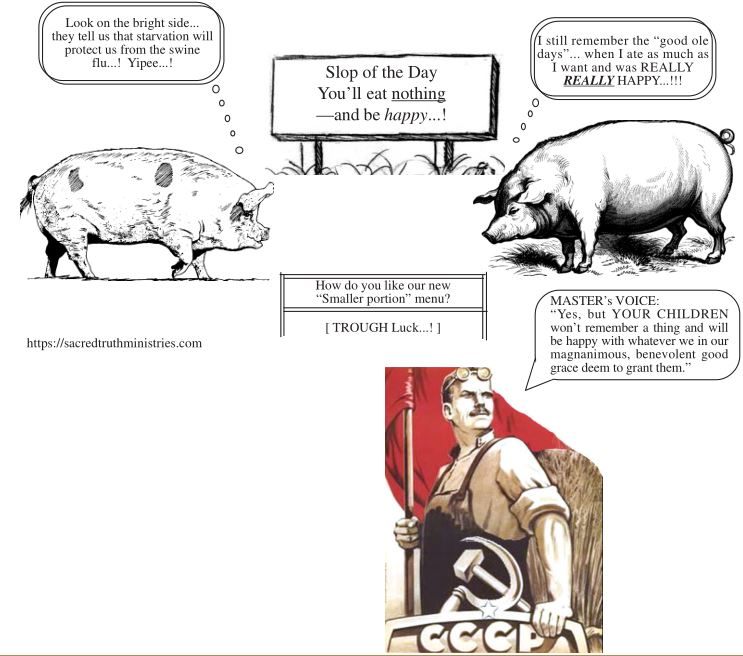 How about putting all the politicians out to pasture on a chain gang on the rock pile...? and then also tell them, “You’ll own nothing, and be happy...!” and then enjoy the warm feeling inside from watching their faces light up in happiness...!

The corrupt, renegade, treasonous politicians of the Netherlands are going to attempt to steal the farmland from the farmers, giving them a few guilders and calling it “compensation”; and the corrupt, renegade, treasonous politicians of New Zealand are trying to tax farmers for cow farts!  Is it just a coincidence that New Zealand derives its name from the province of Zeeland in the Netherlands?

I think all the Mexicans in Mexico out do the cows in New Zealand... are they going to tax the Mexicans 1 burrito for each blast?

The power to tax is the power to destroy.  Tax people out of their land, houses, and businesses.

This song could also be sung to the corrupt politicians...

No You May Not

Another reason why the Third World savages want into Christendom

BETTER PRISONS...!  Since you are going to live a life of crime, might as well do it in the right nations. 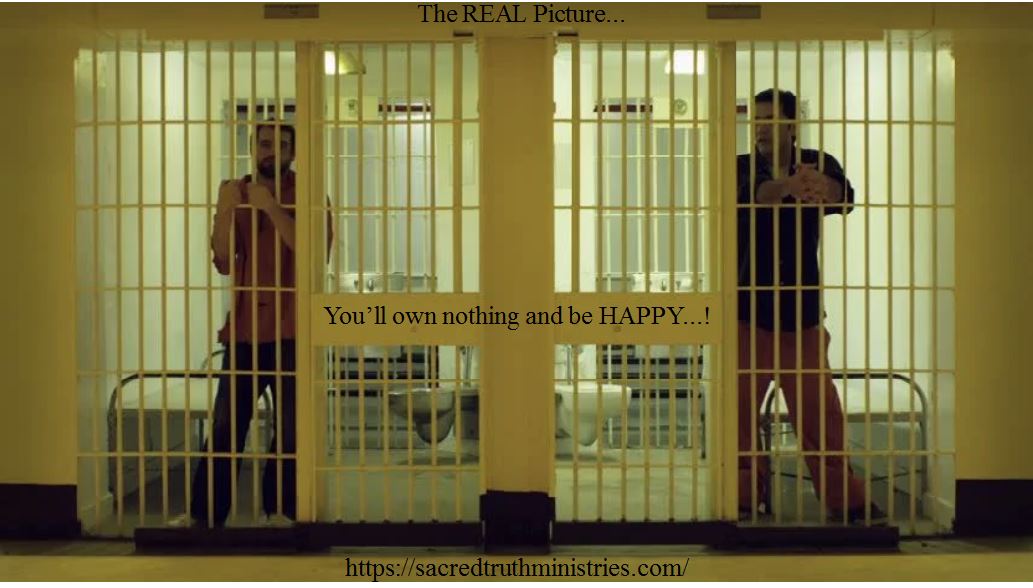 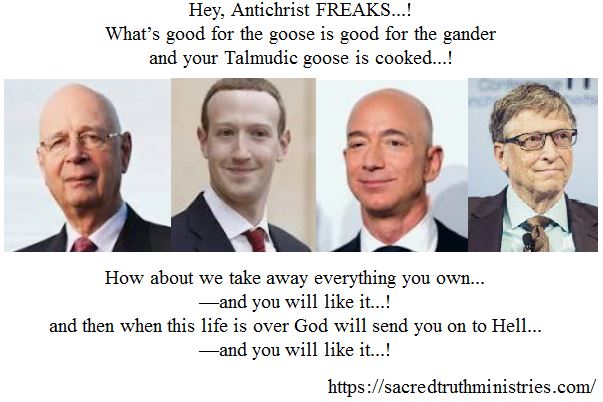