The Frenzy, The Facts, The Foundation

Concerning the God-Ordained Roles of Man and Wife 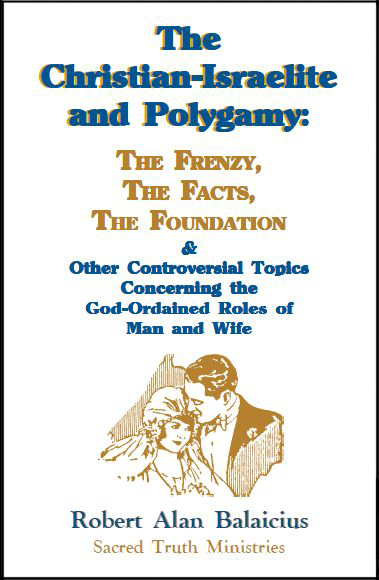 Controversial.  This book neither promotes nor condemns polygamy; but rather, reveals what Scripture saith on the matter, in both law and principle.  The minds of modern Christians have been corrupted by liberalism as feminism and paganism have crept into the modern church (which has been carried over unawares even into the true Israel churches).  The carnal mind (masquerading as a converted mind) rebels against the clear teachings of the Word of God in numerous areas, which are considered by the average person as "old-fashioned," "archaic," "obsolete," "oppressive," "barbaric," etc.  God set down the Law.  It is up to us to follow it; not dismiss it because it "makes waves" and "rocks the boat" in our families and churches; or because it indicts our hearts of our rebellion against God’s Plan.  Do not misunderstand.  Polygamy was not a law mandated by God; but neither was it forbidden as some iniquitous practice.  This booklet will give both sides of the issue things to think about in light of God's Word concerning not only polygamy, but marriage and the roles of man and wife as ordained by God.