The Epistle of James, Chapter 2

Faith Without Works Is Dead

Was Rahab the Rachab  in Christ's Genealogy...?

The Promises and the Covenants Stand...! 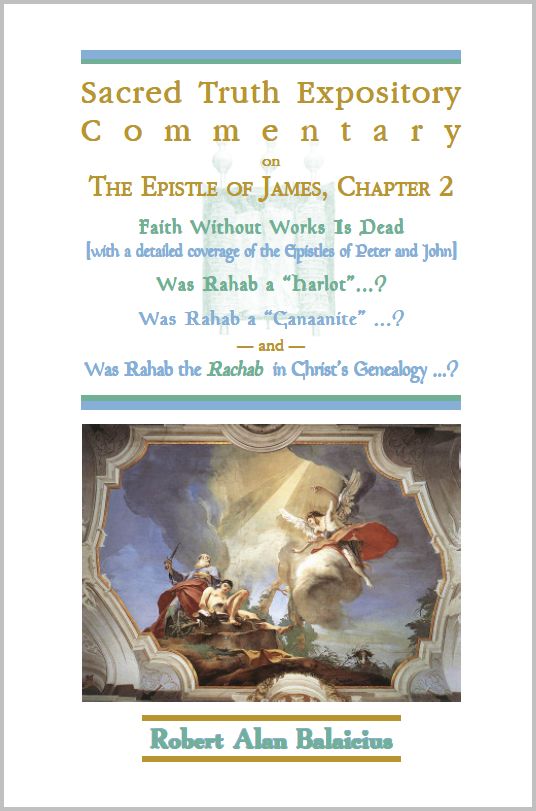 a very detailed and interesting study, both spiritual and historical;

- The Epistles of Peter: showing that the audience Peter addressed was Israel—not "nonIsraelite Gentiles"—both those in the Land of Israel and those of the dispersion in the lands whence God scattered them;

- The Epistles of John: showing that love = obedience = good works = keeping the Law of God = walking in the Spirit = doing righteousness = walking in His Ways, etc. Proof the Law of God was not abolished, but perfected in true believers as they are empowered by the indwelling of the Holy Spirit to live holy lives pleasing in the Father’s Sight in Keeping His Law: His "House Rules" for His children; His Standard of Morality;

- Paul’s Epistle to the Israelites of Rome, chapters 1 and 9: clearly proves Predestination and Election of Israel alone and that his Epistle was written to Israelites, not nonIsraelite "Gentiles";

- Paul’s Epistle to the Ephesians and Galatians 3 (showing predestination and that Paul wrote to Israelites, not nonIsraelite "Gentiles").

- Summary of Joshua, Chapters 1-6; and a detailed account of Jericho.

- a detailed introduction concerning the author of the Epistle of James;

- a brief description and differentiating between James (brother of John), son of Zebedee and James "the less," brother (cousin) of the Lord, son of Alphaeus/Cleophas and Mary (sister of the virgin Mary);