Oops...! as Sir Thomas Huxley once expressed (my paraphrase)... “a beautiful theory smashed by an ugly little fact”.

I am now reading this book, Congo Headmaster, which someone had told me about several years ago... (I stock good used copies, inquire). It is quaint in the beginning, since it deals with the time the author and his wife (and two young sons) spent in France and Belgium for 2 years to learn French to then become teaching “missionaries” (Methodists who had no particular concern to save souls), but thought that it would be interesting for a change (a trip to New York City or Houston would have about the same experience today, but it was probably safer in the Congo in 1954 than in NYC or Houston today), and they had nothing to tie them down and had no better job offer (though it was a climate, as well as culture shock, since they were used to the dry air of Colorado). They seem like generally “good” people (using the word “good” from a humanistic, not Biblical standpoint). His description of the two years or so that they spent in France and Belgium in 1950s is like a breath of fresh air. Now, as I am past page 100, they finally got located where they will be stationed in the Congo.

One of the other men who was also trained already died of disease, they say, because he was a germophobe he was too fastidious in excessively washing his hands or any part of his body that got dirty, and thus he did not build up any slow immunity and when he did get sick it was too much of a shock to his system. They all also had to wear pith helmets being so close to the equator A book that I publish, which I mention after at the end of this mini-Rumination, records Albert Schweitzer (a medical missionary also stationed in Africa near the equator) shared that even in a hospital operating room with a corrugated tin roof, if there was a hole in the roof that allowed a beam of sunlight to land on your head merely the size of a silver dollar, in 15 minutes you would suffer heat stroke. Thus, outside, any European had to have his head covered.

Shaffer, in Congo Headmaster, shares that they had to sleep under mosquito netting even in their house that had screens in the windows. He said that some other Europeans stationed there took the screens out of the windows, since it cut down on the breeze that would help cool the house in the sweltering humid heat.
Harrison L. Shaffer, Jr., had this interesting tidbit to share: 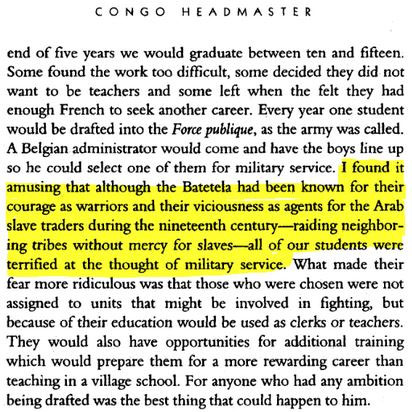 And before the coming of the white man, I am sure that Congo “Head-master” meant something entirely different.
Shaffer also recounts that one time (STUPIDLY) in their early colonial history the Belgian government sent a few messengers with a gift of two rifles to attempt to establish friendly relations with the neighboring tribe, which had in the past been cannibals. The rifles were returned, indicating they had no use for them (GOOD THING!) but that they would welcome the sending of more messengers, as they were tasty...!

Notice the late date in the above excerpt from page 98 of Congo Headmaster, the 19th century and NO MENTION is made of “evil white men” or the “original sin” of the U.S., though we are being berated and false guilted by it* though it is 99% propaganda and ignores the 99% of the guilt of Jews, Arabs, Turks, and Blacks themselves.

[* —just like the propaganda of the Holocaust that has been used to destroy Germany and all of Christendom; just as South Africa has been demonized for Apartheid (which was nothing other than segregation that was practiced in the US until so-called “Civil Rights”), which kept law and order and prevented the mass mahem, vandalism, theft, arson, rape, and murder that is taking place there (and here) now. Of course the sell-out traitor de Klerk was well-rewarded by marrying a Greek billionairess (in addition to sharing the Nobel Prize with Mandela, though they received $1 million each). Weeks after divorcing his wife de Klerk, due to the discovery of his affair with Elita Georgiades married the Greek billionairess. While he was at a Nobel Prize Committee function in Stockholm, Sweden he received the news that his former wife had been savagely murdered in her own home, the steak knife still in her back, murdered by blacks who had worked for her. Most Jewish liberals who championed equal rights, destroying apartheid, giving blacks the vote and ability to run for office—were the first ones who fled South Africa once it was achieved. Wikipedia reports, “In 2020, de Klerk told an interviewer that the description of apartheid as a ‘crime against humanity’ ‘was and remains an agitprop project initiated by the Soviets and their ANC/SACP allies to stigmatize white South Africans by associating them with genuine crimes against humanity.’ This generated controversy in South Africa, and further calls for the removal of his Nobel Prize. De Klerk’s Foundation retracted his statement several days later.”]

On the Edge of the Primeval Forest (1922) & More From the Primeval Forest (1931) & From My African Notebook (1938) Albert Schweitzer, 426pp., 3 books in 1 pb., with Biographical intro., photos, 26.00 + P&H; fascinating books, give glimpses into courage, patience of this great man (his poor theology and misguided altruism notwithstanding) glimpses into minds, natures he tried to help.

This below title (and I also can get all of the dozen or so books by Baker, which are all fascinating; this booket is some highlights I excerpted from one or two of them):

Some Astute Observations Concerning the Peoples Encountered on an African Expedition while in Search of the Source of the Nile River — Excerpted from “The Albert N’Yanza: The Great Basin of the Nile and Exploration of the Nile Sources” (c.1866) by Sir Samuel White Baker, edited by RAB, superbly shows the nature and character of the blacks, turks, and arabs, 88pp., 6.00 + P&H.

See also these booklets that I reprint by Jewish right-wing author:

And I stock these two:

Why Civilisations Self Destruct (1977), Prof. Elmer Pendell (Cornell Univ.) 176pp., pb., 20.00 + P&H. those with lower IQs always tend to outbreed those with higher IQs; modern welfare policies encourage devolution which will ultimately lead to the destruction of all civilisation; ignore evolutionary biology herein.

See also this title which I also stock, which shows the stupidity of the claim that white people traipsed through the jungle and kidnapped blacks: