Second U.S. ANTI-President (—but only for as long as YOU put up with it!)

“Mr. Franklin, what kind of government do we now have...?”

“The United States shall guarantee to every State in this Union

a Republican form of Government”… (Article IV., Section 4 of the U.S. Constitution)

It is a fraud to conceal a fraud.

It is treason not to put down treason.

Those who violate the U.S. Constitution, or attempt to change it, are illegitimate, traitors, seditionists, criminals.  They have no legal standing.  Nothing arises from fraud.

Usurper Joe, a creep named Biden;
May he not be here long abidin’.
May God remove this awful stench;
and take out him and this foul wench;
and send the both down into Hell,
along with all under their spell.
Another blight, nat’nal digrace
—a stolen presidential race.
Bolshevik spawn, destroyers two
death will spread from their evil brew.
Untouchables who think they’re king;
God to the earth Thy Judgment bring;
Reach down Thou from Thy Holy Throne
and touch these dogs down to the bone;
give them indeed reason to fear,
to know Thy Judgment’s very near.
Send down Thy Curse, a Pestilence
on leftists and those “on the fence”.
Let them not know what hit them hard
a fatal blow, caught them off guard.
Pour out Thy Wrath on antichrists
who hate Thee and against Thee fight;
show them who’s Boss, reach, touch them now;
cause them in death before Thee bow;
Lord save Thy People, turn their minds
remove delusion that so blinds
convict of truth, convict of sin
that only You can battle win.
But that You’ll not be on our side
till they repent, cling to Thy Side.
Pour out Thy Spirit on parch’d ground
release obedience that’s upbound
in ignorance and apathy
God save Your people
hear my plea! 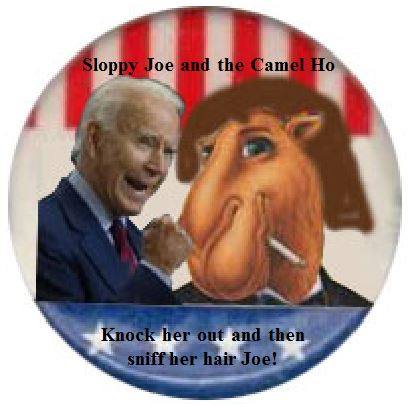 I sent this below information out many times when Hillary was running against Trump.

Why did no one else with an audience make this known...?

There is no statute of limitations on fraud or treason.  Just because the law is ignored does not invalidate the law, nor validate its violation.

Both parents of the candidate must have been lawfully born in the U.S.  That alone makes Camel-a ineligible.

Biden himself is ineligible for picking someone to run as his running mate who is ineligible.  If he does not know the simple rules of the office, he has no business running for that office.  He has no right to sign executive orders undoing all that the previous president did.  That alone is treason.  He needs to be removed and tried for all his crimes... make the bastard take a lie detector test while on truth serum.  Politicians WAIVE their right to claim the 5th amendment against self-incrimination when they run for office, because they are no longer in personal capacity but an official capavity and they have no official immunity and have no rights to privacy.  Thomas Jefferson said when a man assumes a public trust he should consider himself public property.

Camel-a / Hillary cannot be president, and by running she has committed fraud, attempted usurpation of the government of the U.S., and grand larceny in every single state of the Union by accepting and spending millions of dollars to “win” an office she is not constitutionally allowed to hold.  THESE ARE FEDERAL CRIMES.  Obama and every other politician who has endorsed her has committed treason.  THESE ARE FEDERAL CRIMES.  THIS IS SEDITION!  THIS IS HIGH TREASON!  Current politicians have no respect for the constitution or rule of law, they are socialist oligarchs.

Thus Camela-cannot be vice-president and Pelosi cannot be speaker of the House and Hillary could not be Secretary of State—for all those offices are in the immediate line of succession for the Presidency and if a person is ineligible to be President, then he (or she) is ineligible to hold offices that are in the line of succession (no matter how improbable it may be that the succession would reach them).  Those who don’t like that TUFF!  That is the law.  Furthermore, Congress has no authority to change the Constitution.  It is NOT a living breathing document (regardless of any self-declared Constitutional “expert” monkeying around with the law); it was set in STONE.

Thus, someone not eligible for president who runs for president or vice president has not only committed a federal crime, but is also responsible for grand larceny and fraud against not only all those who donated money, but also due to matching funds paid for by the taxpayers; such, therefore, are guilty of defrauding the U.S. Government—the true people.

Without a lawful act of congress to change the constitution to allow a woman to be president, she cannot be president. It was not the intention of the Founders.  The fact that women in New Jersey voted is utterly irrelevant.  None of the 13 colonies sent women delegates—there were no women office holders.  The individual state constitutions declared, “Free, white, land-owning, Christian, male” and a confederation of those states would not change that; they would be of the same essence.  The other colonies would not have agreed to New Jersey’s practices any more than the more-Constitutional states now agreeing to the corrupt states changing voting practices in violation of the law.  Practice does not make valid law... and it does not matter how much time has passed.  Fraud is fraud.  That which is illegal is illegal.

Liberals and feminists’ “feelings” in the matter are 100% IRRELEVANT because our nation was not established to be run by the ever-degenerating “feelings” of the destroyers of society—but by the Constitution.  Our FOUNDERS understood the Constitution better than modern corrupt politicians—especially those pretending to be “constitutional scholars”.  The Constitution is NOT a living breathing document—it is an iron-clad WILL.  Every politician who has not demanded Obama’s SEALED records, birth certificate (and lies concerning it... an altered, falsified birth certificate passed off as legitimate, that alone is FEDERAL FRAUD)... every politician who has not demanded all these things be scrutinized in regards to the “transparent president” (whose records are SEALED, and who reportedly spent nearly $1million to keep them sealed) is guilty of High Treason.

Any member of Congress / judge who did not make known this matter of ineligibility of Obama, Hillary, Camel-a, and all others running for office (Crudz, Martinez, Jindal, etc.) is guilty of High Treason.  Any member of congress / judge who did not know this information is guilty of treason FOR IT IS THEIR JOB TO KNOW THE LAW.  Maybe if they actually spent time READING the Constitution, instead of trying to write their own, they might understand the Law.  But their violation of the law is not a light matter.  They are to be held to a HIGHER level of accountability.  If they do not know the Constitution, how can they take an oath to defend it? and if they are trying to change it, they have violated their oath.
What would a judge or jury think concerning a person’s guilt or innocence, if he had never before flown a plane or even studied how to fly a plane, who applied to be a commercial pilot and took off with 500 passengers and crashed?  If he “parachuted for help” while the plane was on a collision course with a mountain... and he survived, would he be given medals of honor, a national library, a lifetime pension and health care, or be convicted for mass murder?
Any “law” that violates the Constitution is invalid; ANYTHING that Obama did or Biden does is INVALID.  NO ACTION can arise out of fraud... everything that it touches is invalidated.

As it stands now, the Constitution does not allow for a woman president. The drafters of the U.S. Constitution (all men) only gave men the right to vote to men; this was following Biblical Law.  They intended only for men to be eligible for public office, in keeping with the individual colonies’ constitutions based upon the Common Law, which was based upon the Law of God.

Even as it required an UNCONSTITUTIONAL “Constitutional” amendment to give women the right to vote so also in order for women to hold public office lawfull, a Constitutional amendment is required—but no amendment can contradict or invalidate the Constitution; and any “amendment” that does so is invalid.  Liberals and feminists may howl, but that is the LAW and those who attempt to subvert or change it are guilty of sedition.

The Constitution of the United States Defined and Carefully Annotated (1868)

Our Founders DID NOT give “equal rights” to all.  They had no authority to.  God forbids it.  Our Constitution was founded on the State Constitutions, the Articles of the Confederation, and the Common Law that was founded upon the Law of God.  They did not give “equal” rights in government to children, women, aliens, pagan religions, or blaspheming perverts who were recognized as criminals.  Our Constitution does not give “equal” rights... it does not give ANY rights to aliens, communists (or any other political form that undermines our Christian, Constitutional Republic) or to perverts.  The very notion is an anti-intellectual thought of a fool or a madman.  Do wolves have “equal” rights inside the sheepfold with sheep?  Do parasites have “just as much right” to your body as you do?  FOOLS!  Traitors!  Destroyers!  They have no leg to stand on.  They cannot argue the matter according to the facts and the law, because their position is foundationless.  Thus, they argue by emotionalism, argumentum ad hominem demonization, slander, and character-assassination, smear-terror, or simply by Imperial Decree / Fiat (Executive orders, unconstitutional measures illegally passed by Congress and signed by the President or Anti-President) which are completely invalid as well as illegal and constitute High Treason.

The Dragon / Serpent vomits forth a flood (and this is just into the U.S., the rest of Christendom has suffered equal destruction, London, Paris, Marseilles, over 95% alien), thousands of neighborhoods and cities taken over completely in England, Sweden, Germany... our ancestral homes and people destroyed, all in the myth and devil worship of “equality”—which is a one-sided weapon to destroy us; and evil reverse colonialism; except colonialism brought peace, safety, industry, and civilization; reverse colonialism brings crime, disease, destruction, and death.