Like I said... government counterfeiting can have only one result... the US dollar is now worth about $1 of what is was worth in 1932--90 years ago.  Between 1932 and since recorded history gold was about $19 to $20 / ounce...!*  Gold does not change in value.  The relative value of the dollar is what changes.

As I said 4 months ago at the beginning of this fake pandemic when the corrupt, treasonous politicians announced their intention of counterfeiting fake money to give back a little what they stole--to throw some crumbs to the people in lieu of saying, "let them eat cake"... (which did not work out too well in the past)  Look for prices of everything to skyrocket, if they don't manipulate this to control loss of confidence of the dollar.

The price of gold has increased 25% (or rather, the perceived value of the dollar has fallen 25%) since Trump took office—and it is not over yet...

If they counterfeit another "bail out package" (which only about 13% of small businesses received)... then gold will jump to $2500 prob., then the world economy will go into a tailspin as all will know the fairy tale is over and the reality is the US has been bankrupt for decades but has been cooking the books to hide the crime to not lose confidence.

Eventually there must be a "bank holiday" (euphemism for "white-collar government-financier treasonous crime") and currency recall and new currency issue and if you had $100,000 in the old money in the bank, they will tell you that you now have $50K (or $30K) in the "new" money, but it is worth the same (but if it is the same then why change it? --because they are liars and think the people are stupid--which they are).  Thus, they have taxed the people unconstitutionally, over and over and over, Federal, State, local, sales tax when you buy or sell, land tax, etc. —and they have robbed us of the value of the very money with which we "pay" those illegal taxes, and now they will attempt to steal 50-70% of all you still barely own, in one lump sum, and then continue to tax you and regulate you all the while they have flooded the nation with illegals where it is not even safe for you to enjoy your own nation!

Any money you have stashed will become worthless too, not just $ in the bank... because there will be a time limit to turn the old in for the new before the old is recognized as the mere paper it is... and when you cash in the old at the bank, they will give the the "equivalent" of the new.  The only way to circumvent this is to transfer into gold/silver (which the corrupt politicians can always illegally "outlaw") or other real goods (nothing on paper, no stocks, no bonds--only what is real, and ideally, what they cannot continue to tax you on every single year, like land; though land is safe in the fact a thief cannot come and steal it, the politicians unconstitutionally steal a little each year) that will retain their value.

The chickens have come home to roost... but they are so emaciated they cannot climb to roost, but lay exhausted on the ground, and feckless through learned helplessness, will simply bed down in the dirt.  The American Dream ended long ago; it is a psychotic delusion for those who still believe it; nothing is free, nothing will aright itself..... all creation follows the law of entropy... nothing progresses or improves on its own but takes dedication and sacrifice... those to ignorant or indifferent to do anything will suffer entropy.  Those who refuse to stand up while they can will then find themselves in a 2 foot by 2 foot prison cell in which they cannot even stretch out.  "The curse causeless shall not come."  The dream--the reality ended when we turned from God, from the never-changing morality He established, and then began to "tolerate" abominations and perversions (incest is now legal in many US states; pedophilia is next) ... and those to whom fools and "nominal" Christians were tolerant, now find out how hateful and intolerant they are now that they have power and momentum.  The Law of the Harvest, you reap what you sow, you reap MORE than you so, and you reap CONTINUALLY now provides that the Tares (toxic, poisonous wheat-look-alikes, darnels) are choking the life out of the wheat.  God will not deliver from what we are willing to "tolerate".  He commanded us to HATE evil; not ignore, tolerate, befriend, or celebrate it.  Those who do will be destroyed by it.  The only solution is to actually repent before God (which is not merely a "feeling", but turning from what God forbade and turning to what He commanded—without apology to the wicked world)... to stand up for what is right.  To stand up for what God commanded (which never changes; those who think it does do not know God); to stand up for what Christ would have stood up for.  Those who don't deny Christ.

Life as we knew it will NEVER be restored by people doing nothing.  The majority are in that delusion, fear, apathy because God sent it so they will be destroyed.  Anglo-Irish Christian Statesman Edmund Burke said "All that is required for evil to triumph over good is for good men to do nothing".  But as I have long added, "if good men do nothing in the face of evil, then they are not really good".  Choose you this day.

fasten your seat belt and have a parachute handy... gonna be a bumpy ride.

Of course, it nearly hit $2000 with Obama, skyrocketing greater than ever before in history, but it then went back down ARTIFICIALLY to the $1100s, where it was during much of Trump's first 2 years...

that was artificially manipulated or the entire world would have realized the US is bankrupt and shed the US dollar causing worldwide collapse.

the only way that gold could have gone from $1900 to $1100 is if they had BURNED $10 TRILLION in paper money and not reprinted any to replace it.  That is what causes gold to appear to rise (in reality, the dollar tanking).

The U.S.'s economic "EKG"—don't have to worry about "flat-lining" just yet, but a stroke / heart attack is a real possibility, which will lead to flat-lining. 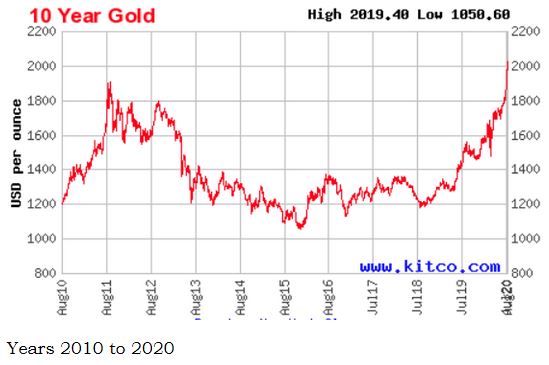 Solution to debt and inflation...?

Fire all politicians, try for their crimes / treason, cancel all their paychecks, perks, and pensions.

stop all services to illegals.

cut all welfare for those who can work some job--who cares if you are in pain, so am I.

cut all "aid" to foreign nations for any reason, all of which is unconstitutional.

bring all troops home from foreign nations, put 90% on reserve, have the others get real jobs.