Christendom is / "Christians" are in a free-fall...

(and most "Christians" think that it is a wonderful amusement ride...!).

However, all delusions will end when terminal velocity impacts

ground zero—which has no "luv" or "tolerance" or "respect" for anyone, let alone those with profound mental derangement / psychosis...!

—those birds are the extinct flightless [without God's Holy Spirit] dodo; which bird is the fitting mascot of Christendumb (as I explained and illustrated in my 2015 booklet, Why Christendom is on the Verge of Extinction).

Christendom means "Christ's Kingdom".  It ONCE WAS.

It has been reduced to Christen-DUMB, or Christ-END-dumb; soon the name Christ will be dropped and it will just be End-dumb.

"6My people are destroyed for lack of knowledge: because thou hast rejected knowledge, I will also reject thee, that thou shalt be no priest to me: seeing thou hast forgotten the law of thy God, I will also forget thy children. 7As they were increased, so they sinned against me: therefore will I change their glory into shame." (Hosea 4)

The majority of "Christians" think everything is wonderful (just like those deluded individuals who are "camera hogs" and in a delusional luv-fest with themselves, to the point that whenever they see themselves on camera or in the mirror that it is the greatest thing they ever experienced and they see no flaws, only the delusions of grandeur in their own minds—completely oblivious to reality); such "Christians" (who don't know the difference between good and evil) know not God; they believe in a pseudo-spiritual humanism; they shall hear Christ declare, "I never knew you..." 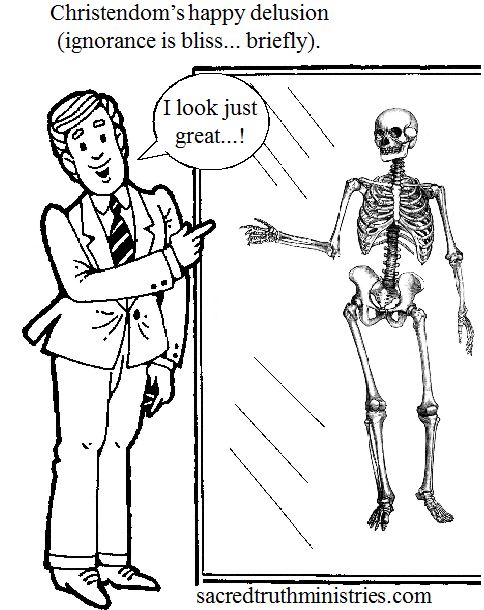 Arise from your slumber... you are following ANTICHRIST.

You don't know Christ's Voice, God's Word, or God... if you think that

and if you think that

ANYTHING in modern society is "good"...

- the invasion of the Third World,

- the move toward pedophilia acceptance as "normal",

- normalization and glorification of every form of perversion / mental derangement,

- political corruption and treason as the "norm",

- 95% of "Christian" churches NOT EVEN KNOWING what sound Reformed theology is (they espouse humanism and paganism and don't even know the difference—or care!)

- tolerance (of all evil, but ZERO tolerance of traditional moral values),

- over 2.2 million prisoners in the U.S. (with maybe only 1 out of 500 criminals caught—now "Sanctuary Cities" to protect an even higher number of criminals; maybe only 1 in 1,000 criminals are now caught and prosecuted successfully to then bankrupt the nation by warehousing them in an institutionalized "rehabilitation" which has been proved for a century to be a socialist myth, with over 85% recidivism, on top of all the additional crimes committed while in prison),

- the rise of the Police State, abolition of the U.S. Constitution and the Common Law and the Holy Bible (on which the Common Law is founded), surveilance and government spying and invasion of privacy and violation of all Constitutional Law;

- the persecution of straight, white, moral, Christians (for merely existing),

- the giving of our nations to savages, entire neighborhoods, megacities that our ancestors founded and labored and invested in to make the greatest on earth—stolen by savages... the wealth of our ancestors, the heist of an entire continent,

Modern Christians brainwashed by the Apostate Church and drunk on polluted Babylonian wine... are in for the mother-of-all shocking wake-up calls.... in their stupidity and perverted understanding of Scripture, they are like this little lamb below who thinks he is on a “play date” with a “brudder from anuder udder” who is just like him, having been brainwashed into believing all creatures are the same—when God says they are not and when biology and common sense and 6,000 years of history says they are not.

Prophecy is being fulfilled before our eyes—but blind "Christians" and their false shepherd think it is a "wonderful opportunity to witness"... and since (in their polluted, humanistic, one-world interpretation of Scripture) Christendom has failed to evangelize the world, God is bringing the world to us so we can.  THIS IS DELUSIONAL AND BLASPHEMY.  God does not tell us to evangelize the flood... and God will not save the flood destroy it once it has served His purpose—to chasten His people to repentance of not obeying His Command to be Separate!

"Wherefore I will bring the worst of the heathen, and they shall possess their houses: I will also make the pomp of the strong to cease; and their holy places shall be defiled." (Ezekiel 7:24) 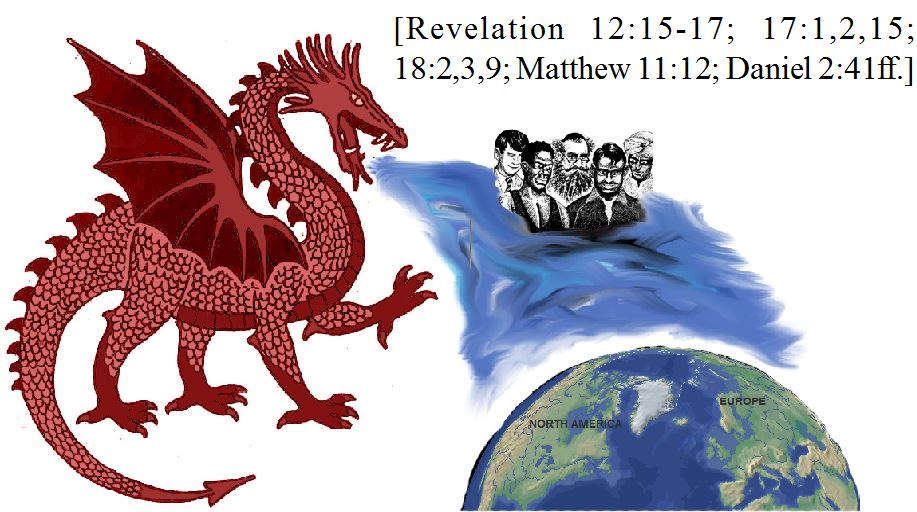 See this shocking video of the conditions in Birmingham, England...

See also at this link (Freedom Is Not Free):

God send a pestilence...!  bring Your people to repentance then destroy the antichrists, the perverts, the alien masses that you have sent to destroy us until we repent...

This video is both heart-breaking and horrific... it is genocide... it is High Treason...

and even the foolish reporters at least twice mention that these muslims refuse to "assimilate" and become "Brits".

THEY CANNOT do either.  The very concept is anti-intellectual and self-destructive... it is like expecting disease or parasites or cancer cells to spread through the body and become "normal".  Disease and parasites do not belong in the body and they can never be normal.  The only way they can be thought of being normal is the result of brainwashing and profound delusion.

The only solution is what God ordained and that is complete separation; light can have no fellowship with darkness, nor good with evil.

They breed like rats because they don't plan on raising their children or caring for them and they cause similar destruction as rats do if they are left unchecked; they live off the taxpayers expense, rob and rape and kill, take over what our ancestors sacrificed to build and pollute it, spread disease... and like gangrene or cancer will just continue to spread out and out and take over all.

They cannot be converted.  They are rabid machines.

Christ never told His sheep to convert or lay down their lives for the dogs, swine, or wolves.  Any such notion is an ANTICHRIST PERVERSION of the Great Commission.  Shepherds are to seek out God's sheep... not the carnivores or scavengers.

It is like this (as shown in the video) throughout all of Christendom now... it is NOT progress... die-versity is not our strength, it is our demise our destruction.  They destroy whatever they touch.  The entire conspiracy is anti-intellectual and based on fraud and force and treason and antichrist genocidal murder and amalgamationism...

Tolerance is a myth, a one-way street intended solely to destroy us... and it is doing it.]

God save Your people!  Pour out Your Holy Spirit to convict Your people of sin, the knowledge of what sin is (since they don't know the Shepherd's Voice and believe the voices of strangers into thinking that Christ abolished the Law—when He said that He did NOT (and He said to not EVEN THINK it) and that NOT ONE JOT OR TITTLE would pass from the Law.  Morality never changes.  Salvation does NOT come from keeping the Law.  It is the moral code by which God commanded us to live throughout all our generations forever!  Evil never becomes good.  Abominations never become holy.  If you think they do you are a friend of the world (which makes you the enemy of God) and you follow a false christ and don't know God.  John wrote in his epistle,

"4He that saith, I know him, and keepeth not his commandments, is a liar, and the truth is not in him. 5But whoso keepeth his word, in him verily is the love of God perfected: hereby know we that we are in him." (I John 2)

Love does NOT "replace" the Law.  Obeying all that God commanded is EVIDENCE of true Love... evidence of TRUE LIFE, true REGENERATION.  Jesus did not say, "If you love Me exude warm and fuzzy 'feelings'..." but IF YOU LOVE ME KEEP MY COMMANDMENTS.  His Commandments were GOD'S COMMANDMENTS.

God convict Your people concerning what sin is, their guiltiness of it and their need to CONFESS AND TURN FROM AND REPENT OF IT... (repentance entails TURNING FROM what is forbidden and TURNING TO what was commanded; anything less is pseudo-spiritual delusion)...

"Give not that which is holy unto the dogs, neither cast ye your pearls before swine, lest they trample them under their feet, and turn again and rend you." (Matthew 7:6)

and violation of this COMMAND of Christ has been our destruction.

"5 ...Go not into the way of the Gentiles [nations], and into any city of the Samaritans enter ye not: 6But go rather to the lost sheep of the house of Israel." (Matthew 10)

[—the true peoples of Christendom; not the imposters in the litter box in the middle east.]

This was the FIRST Great Commission.  The SECOND did NOT change the "target" but only the SCOPE (not local, but worldwide)... to regather the lost sheep whom God scattered and whom He promised to regather... to regather the wheat that He scattered... when harvest time comes, if you scattered wheat, you don't harvest WEEDS.

Christ before ascending into Heaven commissioned—

HOW was Christ sent...?  Do you not believe Christ's very own words...?

You reap what you sow... sow disobedience, reap corruption and death.

GOD IS SOVEREIGN.  He does not change His Plan simply because modern polluted minds don't like it, don't think it is "fair"... THEIR MINDS and WILLS need to conform to HIM otherwise they shall hear, "I never knew you...!"

God save Your people...!  Save Christendom...!  Send a pestilence on those who hate You... cause the earth to receive the flood...!