IF LGBQT (or whatever the current rendition is of that acronystic perversion / mental derangement) is all about “inclusiveness” and “love”, “equality”, “acceptance”, etc... then why, o why is there no “S” in the name for “straight” people...?

Also, why does “L” get “top billing”... how is that “equal”...? and the poor “T” gets tacked on at the end, as if insignificant... why is poor “T” oppressed and overshadowed by “L”...?  It is not a matter of alphabetic order; were the acronym a matter of alphabetic arrangement, it would be BGLQT (and so poor, poor, poor, Q and T are oppressed either way!).  Alphabetic arrangement, indeed, the alphabet itself, must be viewed as oppressive Colonialist, White Supremist Imperialism... those poor xyzs having had to ride the back of the alphabetic bus for the past 2,000 years or more.  Talk about oppression!  I have a dream...! where a letter is not judged by its perceived Colonialist alphabetic segregation, but by the content of it is unique contribution to all letterkind...!

However, the arrangement of the acronym LGBQT as

would be no better.

If LGBQT really cared about equality, they would not give anyone first billing.  They would abandon the alphabet entirely, or simply structure all words randomly, which, of course, would mean that any given word could mean possibly half a dozen different things.

Even if they gave each a symbol, they would not be able to list them in a row, because again, the majority of Caucasian languages read top to bottom and from left to right, so that is where people who speak these languages automatically look, and that is unfair to give anyone “top billing” in the “exclusive” and “oppressive”, “elitist” position of top left.  But remove top left, and like teeth in a shark’s mouth, the next automatically becomes the top, left oppressor.

Even if words and sentences were structured like this... 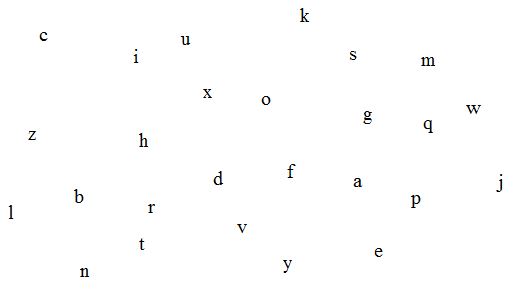 someone still gets top left billing.  How oppressive!  Where’s an alphabetic revolution when you need one...!

And does the above sentence (no need for “oppressive punctuation” that simply “divides” us—and don’t get me started on math!) read, “You are invited to my house for dinner” or “You owe me five hundred dollars”...?  Also, remember, words can be spelled uniquely depending on whatever the writer “feels” at the time (and likewise, the words can “mean” whatever the reader “feels” like at the time—that would be true equality, right...?); and the letters themselves should no longer be rigidly conformed to an oppressive BINARY model... right...?  The letter “a” does not merely mean “a”, it can mean “l”, “b”, “g”, “q”, “t”, or “y” or any other letter—maybe the letter “a” can even mean the numbers 2, 4, or 13...?  With either psychosis and algebra, anything is possible...!

But the reality is: if everyone is special NO ONE is special.  Equality of all things is a myth.  If you think otherwise, you won’t care if next time that you are drowning someone throws you an anvil instead of a life preserver... right...?  or if next time at a restaurant when you order chicken alfredo, or a New York strip steak, or your favorite meal, if the waiter brings you a plate of insect larvae instead, right...?  ‘We’re all God’s creatures’... we’re all the same... right...?

Of course, those who reject truth in lieu of the happy delusion (psychosis) they believe will assert, all peoples and cultures, religions, and genders are equal and the same, etc...

[What about ages, height, weight, body composition, healthy or handicapped, are they all “equal” too...?]

The reply, of course, to that would be:

You, being an Evolutionist Empiricist, should have no trouble answering this matter:

Please show me... where is the evidence that all are equal and the same...?

Is not the Welfare State and "legislated psychosis" actually evidence to the contrary?  Where is your foundational tenet of faith, the lofty "survival of the fittest" and "natural selection"...?  If certain peoples or groups need legislative acts to declare them to be equal and to protect them from getting their fragile egos hurt, how can they possibly be equal?  If certain people or groups need endless, enormous sums (TRILLIONS of dollars) as a handicap, to give them a "leg up" and help put them on the road to "equality"... is that also not evidence that they are NOT equal?  4,000 years of history, culture, ethnology, psychology, etc., where is the evidence that all peoples, cultures, religions are equal?  If all 'evolved' from some unknown goo by some unknown process by some nonempirical occurrence, why are there not a plethora of parallel peoples, cultures, and religions that indeed are equal and don't need to feed off another group in order to maintain the myth of equality, or hopefully, one day, millennia late, "arrive" at equality by the philanthropic sacrifice of those who had arrived millennia earlier on their own?  Where is the equality?  Where is the evidence?