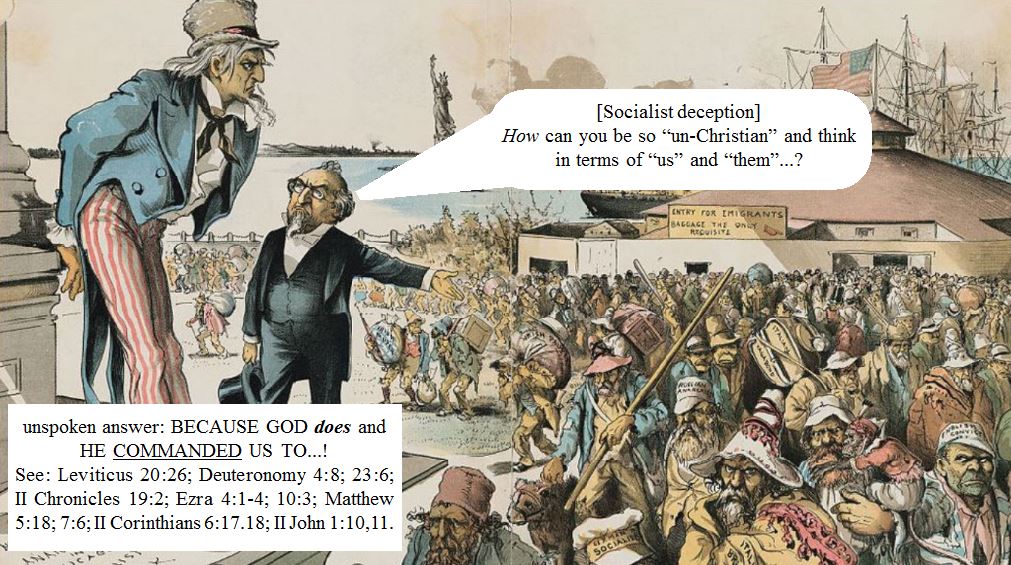 - Going Ape Over Political, Academic, Journalistic, and Ecumenical “Monkeybusiness”: A Swiss Tale, 84pp., 7.00 + P&H.  Satirical short story; exposé and explanation of the invasion of Christendom by the Third World; and the only solution.]

Understand the true message of the luv / tolerance / all-inclusionist / ‘Anti-“us” vs. “them” ’ PROPAGANDA (LIES) and don’t be intimidated by dishonest, hypocritical FALSE GUILT TRIPS...!  NO verse of Scripture supports their position.  NO philosophic law of logic / ethics supports their postion.  It is insuperable and they can only maintain it by your choosing to believe the myth and submit to their artificial, spurious dogma (intended only to destroy Christendom).

The anti-intellectual, delusional, mentally deranged myths of “Luv, Tolerance, Inclusion, Equality, Minority rights, share and share alike,” etc. are a ONE-WAY street.  Once THEY are the MAJORITY, there will be no such thing as “minority rights”.  Majority Rule will once again be legislated once they have invited in enough aliens who will vote their way to UNCONSTITUTIONALLY*1 and IMMORALLY steal our nations—all of Christendom from us.  THAT can only work if you play by their self-imagined “rules”*2 and enter their immoral psychosis with them...!  GOD COMMANDS OTHERWISE.  GOD COMMANDS THE VERY OPPOSITE.  GOD COMMANDS SEPARATION.  Christ commanded GIVE NOT that which is holy to the dogs or swine lest they destroy you.  That was not an option or merely good advice.  Pigs and swine never become sheep.  If you think they do... you are not a shepherd but a thief and destroyer!  Tares and thorns never become wheat or olives.  GOD ESTABLISHED “US” and “THEM” and FORBADE “US” TO MINGLE WITH “THEM”.  GOD IS HOLY AND COMMANDED US TO BE HOLY EVEN AS HE IS.  GOD IS IMMUTABLE.  HOLINESS NEVER CHANGES.  MORALITY NEVER CHANGES.  WHAT GOD DECLARED TO BE SIN AND ABOMINATIONS 4,000 YEARS AGO STILL ARE TODAY—AND EVER WILL BE...!  Understand this: The more that God's people absorb Babylon—the more they become Babylon and the less they are God’s people.  Babylon means, “confusion by mixing”.  Scripture does not speak favorably of Babylon (and refers to the end time world as Babylon, for a reason).  Scripture does not speak favorably of the “mixed multitude” or “mingled people” either.  The more Christendom absorbs pagans, the more pagan Christendom becomes (the pagans do not become Christian).  This is why God commanded separation and not to cast pearls before swine.  To violate what God commanded is death.

[*1 Our Forefathers had no intention of “equality” or giving aliens (or antichrists or perverts or communists or atheists) a vote or allowing them to be elected to office.  That makes as much sense as being in a rowboat and allowing those whom you picked up out of the water to row against you, the boat’s owner, to go in the direction that they want, instead of the direction that you want—and they keep picking up more people in the water to row with them against you.  Soon, YOU will be thrown from your own boat (or be eaten).  THAT’s what you get for violating God’s Law and loving the wicked and doing good unto those who hate OUR GOD—and even if they “claim” to love our God... God commanded SEPARATION.  ONLY SUBVERTERS of our True Reformed Christian Faith and our Form Government suggest otherwise.  It is NATIONAL and SPIRITUAL SUICIDE.  You reap what you sow.  When you make a COVENANT with DEATH and an AGREEMENT WITH HELL, what do you expect?  The curse causeless shall not come.  Christ Jesus, the Personification of Wisdom, declares, “He that sinneth against Me wrongeth his own soul; all those who hate Me love death”.  Those who hate what God commanded, the unchanging morality that He established—HATE GOD.  God did not tell us to be “tolerant” or “loving” or “pluralistic” or “liberal” or believe in “equality” or “minority rights”—or even “Majority Rule”.  GOD made the Rules (and they NEVER change) and we are supposed to obey Him.  Anyone who believes otherwise is either a FOOL who cannot follow the plot or content of a storyline (thinking that every pronoun, “he”, “she”, “them”, etc. in the novel refers to EVERYONE ALL THE TIME, and not specific individuals—or thinks that the author changes the plot continually throughout the novel, contradicting himself) or such a person is a KNOWING TRAITOR purposely leading people astray with false doctrine.  The notion (mental deranged delusion) of equality is anti-intellectual (dissimilar things CANNOT be “equal” and a table and a horse are not “equal” simply because both have “four legs”; nor a human and a gorilla simply because they both have “red blood”).  The PERVERTED, FALSE interpretation of the U.S. Constitution by MODERN TRAITORS is intended only to weaken and destroy us so that our nation can be taken from us.  “Tolerance” is only the strategy for the intolerant of us to gain the upper hand.  God forbade tolerance.  God is INTOLERANT.  He is HOLY.

*2 When two opposing sides meet on a field for sport or war and one side religiously follows a rigid set of rules and the other side follows no rules at all, the side that follows no rules (without Divine intervention) will win every time.]

Those who champion luv and tolerance are THE VERY MOST HATEFUL AND INTOLERANT people in the world, of anyone who disagrees with them or stands in the way of WHAT THEY WANT AT EVERYONE ELSES EXPENSE.

Walls, like those along the Southern U.S. border, or in Poland or Hungary (or between HEAVEN and HELL) are BAD BAD BAD... except in the elite’s gated communities, high rise apartments, and government offices, public parks (unless you are an illegal alien or “homeless person” [that is, a diseased drug addict]) or the Vatican, or State of Isra-lie, or illegally confiscated neighborhoods in Christendom declared, "Sharia Law zones... no white people / Christians allowed".  Guns are BAD BAD BAD, except in the hands of the corrupt “government” and the corrupt politicians’ hands or those of their personal bodyguards.

Personal wealth and property is BAD BAD BAD... except when it is corrupt, elite politicians who think that they are “the government” (when they are NOT) who want to take everything you own so that they can own it all...!

Prime example... here, the mural on the wall declares “build a more inclusive...”

—and yet their plans are to TEAR DOWN the historic monuments to HEROES, Robert E. Lee and Stonewall Jackson, of the traditional southerners—heroes of whom even NORTHERNERS at that time of history had nothing unkind to say and spoke of them in the highest regard.  Tearing down the monuments to southern heroes is the FIRST STEP TOWARD GENOCIDE.  IT IS A HATE CRIME.

WHO THEN are the real “haters”...?  HERE IS A TIP: If you hate the people around whom you have chosen to immigrate—go the hell back where you came from and live among your own people and stop being haters and attempting to destroy someone elses family, home, nation, culture.  Is that your notion of “luv, tolerance, acceptance, inclusion, equality”...?  What about the dark black Ruandans / Ugandans who in 1994 tortured and savagely slaughtered around a million lighter black Ruandans / Ugandans simply because they were lighter...?  Uganda suffered such barbarity FROM ITS OWN PEOPLE continually ever since its “liberation” or “independence” from Great Britain in 1962.  This 1994 massacre was merely the most notable; before that around 300,000 were slaughered 1971 to 1979 during Adi Amin's uprising—and there have been numerous massacres on smaller scales even in recent years.  And of course, let’s not forget that the blacks of Haiti tortured / murdered every white man, woman, child in the late 1700s to early 1800s—and uprisings continue to this day, though against what, is anyones guess (despite billions of dollars that the nations of Christendom FOOLISHLY give in “aid” to nations that demanded “independence”).  Is that your notion of luv, tolerance, inclusion...?  OF COURSE IT IS.  But stupid, liberal whites are utterly ignorant of the “fine print" (or hidden clauses) in the Covenant with Death that they have signed.  They may have the right to sign it for themselves, but they have no right to sign it for the rest of us—or for anyone other than themselves.

But were it not for Colonialism, the majority of the Third World would still be running around naked, killing each other, with dirt cattle paths through the jungles for roads, no bridges, no hospitals, no infrastructure of any kind... no modern appliances or machinery... just a stick and an ox.

As far as the mindless, illiterate expression of British Queen-consort Charlotte having been (not “is” since she died centuries ago) “bi-racial”, is mentioned more honestly at

where (Sir Walter Scott’s humorous declaration notwithstanding), it is also reported:

In 2017, David Buck, a Buckingham Palace spokesperson, was quoted by the Boston Globe as saying: “This has been rumoured for years and years. It is a matter of history, and frankly, we’ve got far more important things to talk about.”

—in other words... not only is “the jury still out” on that one... the jury does not even care...!  but, not to worry, the corrupt Prince Charles, through his father, has enough nonwhite blood to make any Third-World pouty child happy.

Anti-intellectual africans seem to think that anyone who was ever in Africa (or even named Africanus) was a Nubian.  The original Egyptians were not black, but eventually intermarried with Nubians to produce the modern illegitimate people who bear the name of the founders of that nation (mixed even greater with Arabs and Turks).  Hannibal certainly was not a Nubian (though african anti-intellectuals claim he was).  The ancient Greeks (who likewise, are mostly Turkist and have little relation to the original Greeks) and Phoenicians founded city states (including Carthage) along the ENTIRE MEDITERRANEAN coastline, including that of north Africa (and including what is now modern Turkey, though then called Asia Minor or Anatolia).  Roman generals who sported the name Africanus did so because it was in that theatre they distinguished themselves in war, NOT because they were of African descent.