SUCH BLASPHEMY!!!  How MISOGYNISTIC!  HOW INSENSITIVE OF GENDER DERANGEMENT!

I ask: WHERE IS THE EMPIRICAL EVIDENCE?  To those who worship the Scientific Method, why do they bow down to mere "anecdotal" information (especially anecdotal information of someone mentally and morally deranged!)...?  What scientific evidence is there that a person's essence or being (twisted into something called "orientation" or "identification"—again, for which there is no empirical evidence, only "OPINION OF THE DERANGED PATIENT") can be different than the person's biological reality?

Can a horse actually think it is a cow?  Should a law be passed to fine someone $400,000 if he casually says to someone on the street, "that's a beautiful dog you have there" —if the dog wants to be recognized as a cat? (and could the dog enter the annual Cat Show?)  What if the fleas on the cat-dog think that they are butterflies?

What about a vegan at a restaurant who orders a veggie burger and is brought a hamburger? can the waiter not reply (once the vegan awakes from having fainted)... “I am sorry ma‘am-sir, this cow identified with being a soy bean!  It is legally a veggie burger—unless you want to be fined $400,000...  EAT IT...!”  Since PC-YE-GADS has taken over the field of psychology, if Pavlov‘s bell is run before feeding a conditioned dog that thinks it is a cat, being fed hamburger from a cow that thought it was a chickpea, when the cat-dog drools, if the drool identifies with being strawberry syrup, can the drool be sold as strawberry syrup?  Inquiring minds (and pancake eaters everywhere) want to know!

What about men who think they are women who are on special drugs that can only be for men? or vice versa?  If a deranged/perverted man who thinks he is a woman can use the woman's bathroom—how can he (and all PCDS society) be so HYPOCRITICAL and DISHONEST to take a medication for a man instead of a specific medication for the woman that he believes that he is? 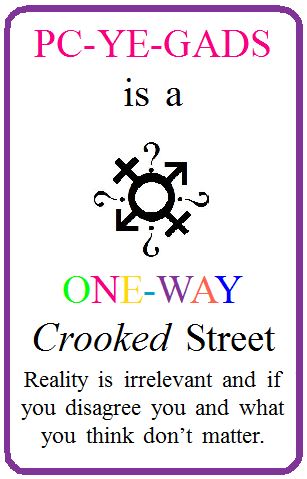